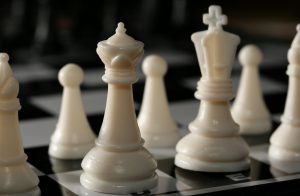 The Garfield Chess team successfully defended their title of league champions by defeating Lakeside in a thrilling last round match this week by a score of 3½ to 1½.  Garfield has now won the Seattle Metro League title for the third consecutive year, a historic feat last achieved when Yasser Seirawan (pictured on our first floor wall mural), future chess grandmaster and United States Champion attended Garfield in the 1970s.