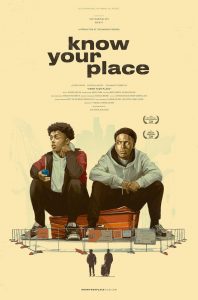 The 2022 Seattle International Film Festival presented two of its top honors to a drama starring two former Garfield students.
“Know Your Place,” which follows two teenage Ethiopian-Americans in an odyssey across Seattle, took the Golden Space Needle audience award for best film as well as the Grand Jury Prize in the festival’s New American Cinema Competition. The film was shot in 2018, when Director Zia Mohajerjasbi cast Joseph Smith and Natnael Mebrahtu (then 15-year-old sophomores at Garfield) after having worked with them in a previous short film. They, like everyone else in the film, were nonprofessional actors.
“This drama is a deep dive into a Seattle subculture that has rarely if ever been shown before with such intimacy. Character-driven and of the moment, it takes us on an unexpected journey of discovery, and reminds us of the daily hardships of living on the margins in America,” said the jury, composed of Thelma Adams, author and film critic; Andrew Carlin, director of theatrical distribution and sales at Oscilloscope Laboratories; and Bill Guentzler, senior director of acquisitions at Gravitas Ventures.
Smith and Mebrahtu had appeared in Mohajerjasbi’s “Hagereseb” (2015), which was shot in Yesler Terrace, the public housing complex then in early stages of redevelopment. That film, dealing with the theme of a community facing displacement, led to the making of “Know Your Place,” the director’s first full-length feature.
Mohajerjasbi, 36, was born in Lake City, raised in Kenmore and is a UW graduate. He shot most of “Know Your Place” in Seattle locations: Capitol Hill, Queen Anne and the stadiums area. However, “the beating heart of the film is the Central District, mostly between Madison and Cherry [streets],” he told The Seattle Times.
https://variety.com/2022/film/news/seattle-international-film-festival-2022-winners-1235239732/
https://www.seattletimes.com/entertainment/movies/siff-program-spotlights-seattle-and-filmmakers-
with-northwest-roots-including-megan-griffiths/
https://crosscut.com/culture/2022/04/seattle-movie-about-loss-and-gentrification-debuts-siff