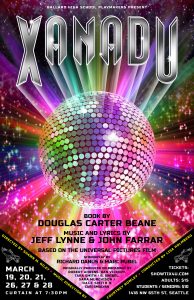 POSTPONED UNTIL EARLY MAY:  Xanadu will now replace BHS’s spring play which is typically held in May. Purchased tickets will be honored for the new dates. For more information, see: https://docs.google.com/document/d/1NR55bCDTutl-tUFhJDQMlvHPRMaVQubI6mWN97NmaSM/edit

The Ballard High School Playmakers will stage the comedy musical Xanadu, which famously starred Olivia Newton-John in movie theatres back in 1980.

It’s 1980 in Venice Beach, Calif., and chalk-artist Sonny is frustrated by the mural he created of the Greek muses. From Mount Olympus, a muse named Kira dispatches to Los Angeles disguised as a human to encourage him in his art. There’s one caveat: a muse must not fall in love with a mortal.

Together Kira and Sonny dream of opening a roller disco named Xanadu, as Kira’s evil muse sisters work to curse the deal and banish Kira for good.

With its campy script and pop-music hits, Xanadu is a joyous love story against the backdrop of the disco music scene. The score features the classic Electric Light Orchestra songs “Strange Magic” and “Evil Woman,” plus “Magic,” “Suddenly,” and “Have You Never Been Mellow,” which Olivia Newton-John made famous.

Tickets are $15 for adults and $10 for students/seniors. Reserved seating tickets can be purchased at https://showtix4u.com. 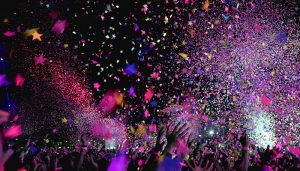