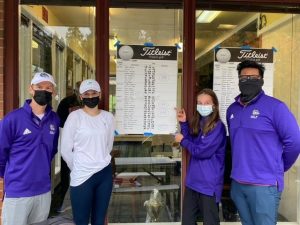 For the first time in decades, and after finishing their regular season with a 7-3 record, the Garfield girls golf team made it through the Metro Conference tournament and qualified for next Spring’s district tournament.

Held October 21 at Jackson Park GC, the Bulldog golf team led by coach Chris Englund and including senior Jordan Lewis, juniors Audra Kim and Seneca Jessee, and sophomore Lucy Waggoner were one of six teams (out of 16) to advance to next Spring’s District tournament to be held at Riverbend GC in Kent, WA.

When asked for comment, Coach Englund said, ‘The girls have worked hard and continued to get better all season. I’m very proud of their effort. Go Bulldogs!’